What is the Hanagasa Festival?

6:00pm
Opening address
6:10pm
Parade starts and
Opening of the Festival – Hanagasa Dance Circle in front of Yamagata City Office
8:30pm
Audience can join the dancing for the final part of the parade
21:45pm
End of parade

Depending on the weather, the parade and schedule are subject to change, including cancellation.

The Yamagata Hanagasa Festival is a dancing parade held on a midsummer’s evening, spanning three days and involving over 10,000 dancers.
Some features of the Hanagasa Festival include each group dressed in its own splendid costume, with dancers waving hats adorned with orange safflowers. The dance is performed to the stirring Hanagasa ondo, with dancers moving to the rhythm of the bold Hanagasataiko drums and chanting “Yassho makkasho”.
With around one million spectators each year, this is one of the famous summer festivals in the Tohoku region, and is loved by people all over Japan.

Origins of the Yamagata Hanagasa Festival

The origins of the Yamagata Hanagasa Festival lie in the 1963 ‘Zao Summer Festival,’ a promotional event encouraging tourism in Yamagata’s Zao region. The finale of that festival was the Hanagasa Ondo Parade (Flower Hat Folk Song Parade). From 1965, this Hanagasa Ondo Parade became a stand-alone event that we know today as the Yamagata Hanagasa Festival.
In 1970 at Expo’70 in Osaka City, the Hanagasa Dance was performed as an example of Japanese folk arts, showcased to the world. Through this international exposure, the festival also became well-known throughout Japan.
Across three days, there are over 10,000 dancers, and the festival has grown to become a major event, with visitors from all over the country coming to enjoy one of the great summer festivals of North-East Japan.

The Hanagasa Ondo is a Japanese folk song that represents Yamagata Prefecture and has been sung for many, many years. It is also known as the Hanagasa Odori Uta (Flower Hat Dance Song). While there are still a range of views as to the precise origin of this song, one version of events has it that in around 1910, in the Murayama region of Yamagata Prefecture, there was a song known as the “earth pounding song,” or Dontsuki Uta, for workers who carried out the job of pounding earth to harden the ground. The current, lively version of this song, accompanied by the musical instruments shamisen, (Japanese lute), shakuhachi (Japanese flute) and taiko (Japanese drums) , dates from around the 1930s.
The chant “Yassho makkasho” that is heard in the Hanagasa Ondo is an embellishment to enliven the mood of the song and the singers. It does not have any particular meaning.
This “Yassho makkasho” is said to be a rhythmical chant that originated from workers involved with sealing up the base of a pond by pounding the earth to harden it.
The lyrics of the current Hanagasa Ondo were selected by soliciting ideas from the general public. From an impressively large number of submissions, 13 lyrics were chosen. To these 13 lyrics, two historical lyrics were added, giving us the 15 lyrics of the current Hanagasa Ondo. The Hanagasa Ondo, created for the Hanagasa Ondo Parade, reflects the flow of the Mogami River, regarded as the mother of Yamagata Prefecture. The lyrics also include mention of specialty produce from each region of Yamagata Prefecture.

Sample of the Hanagasa Ondo [MP3]

The many versions of the dance

From around ten historical versions of dances performed around Yamagata Prefecture, a new choreography was created for the Yamagata Hanagasa Festival so that anybody could easily join in the dancing. This choreography was designed to retain the style of traditional Japanese dance and, as such, a new dance was born. The proper name of the dance is ‘Traditional Hanagasa Dance ~ Kunpu Mogamigawa’ (Fragrant Breeze of the Mogami River), popularly known as Onna Odori.
At first, this version, featuring traditional Japanese dance, elicited the true joy of dancing en masse, however in 1998 another soul-stirring style was created under the formal name ‘Traditional Hanagasa Dance ~ Zao Gyoko’ (Zao Light of Dawn) , popularly known as the Otoko Odori.
Currently, there is a variety of new styles of dynamic and original dances, and the Hanagasa Festival has become a festival that charms spectators with its diverse dance styles.

The Mogami River is considered the mother of Yamagata Prefecture. The sense of a refreshing breeze across this river is combined with the image of ripened ears of rice swaying elegantly in the wind. This is the magnificent Traditional Hanagasa Dance, first danced in its current form in 1963. 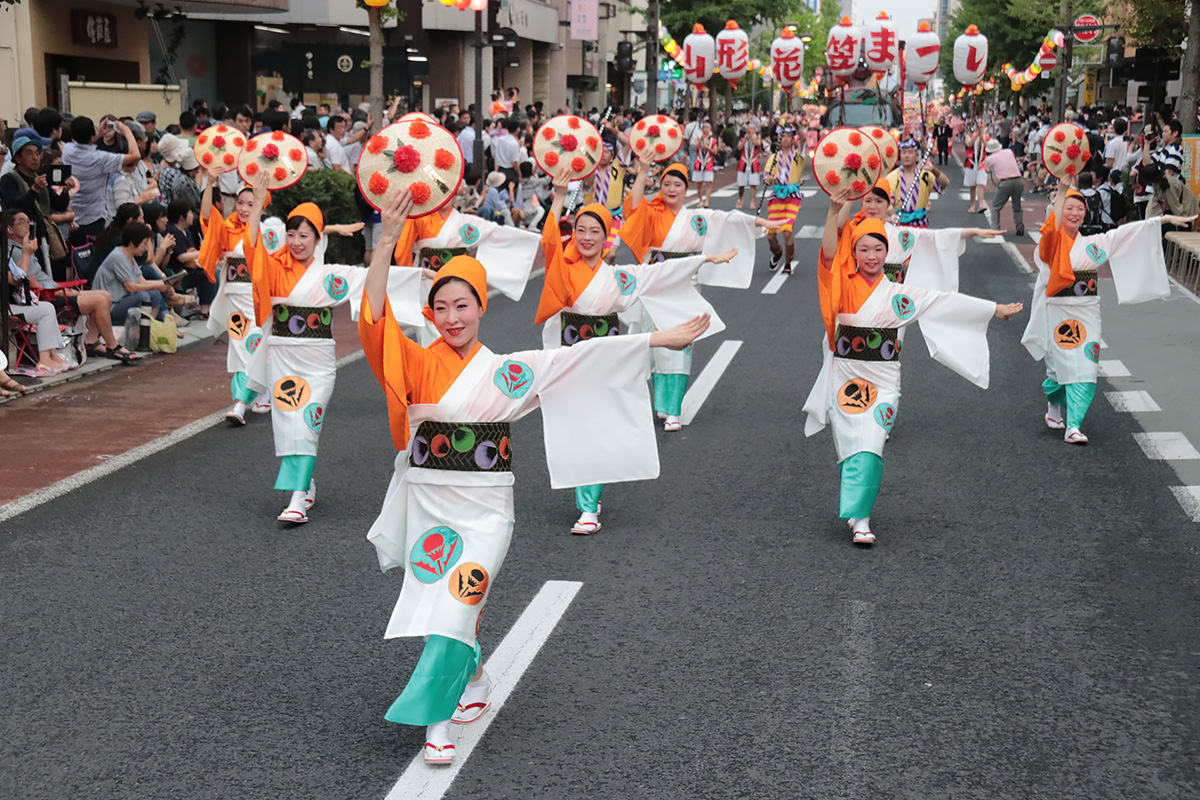 Evoking daybreak over the Zao Mountain Ranges and the image of treading decisively across the land, this dance celebrates the blessing of nature in a gallant dance. Created in 1998. 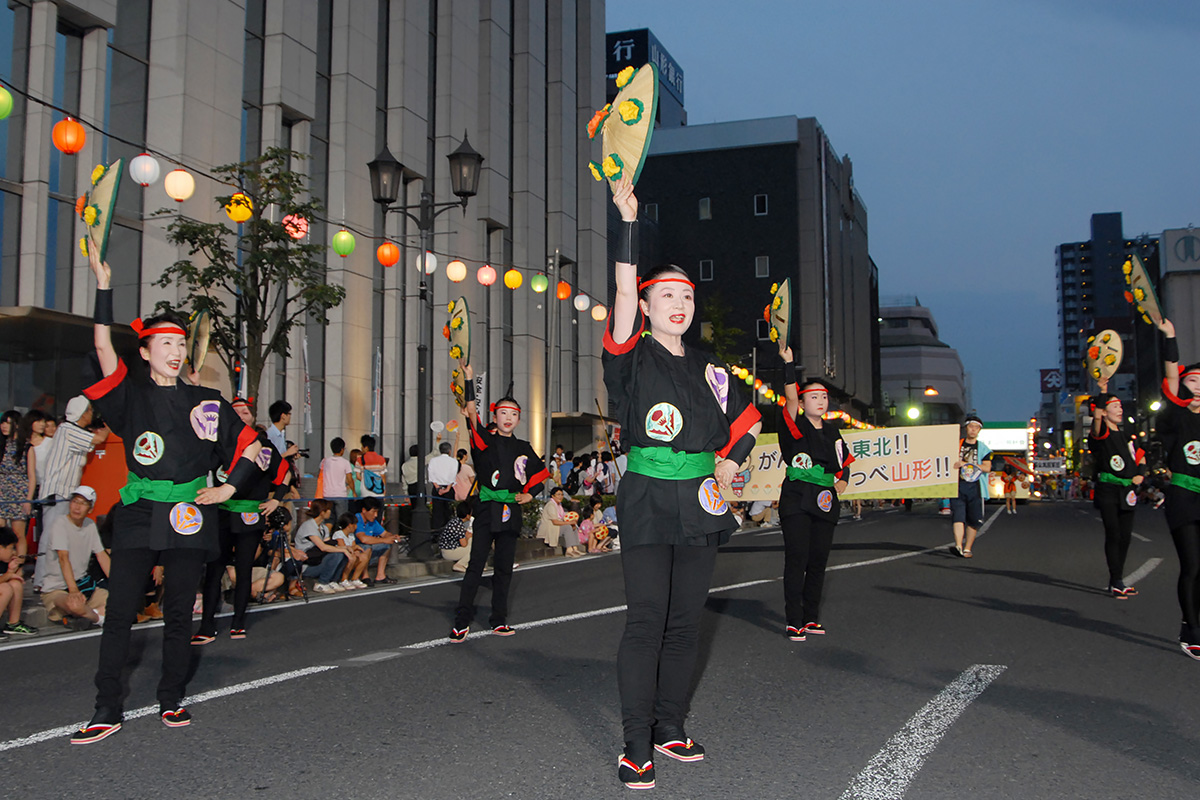 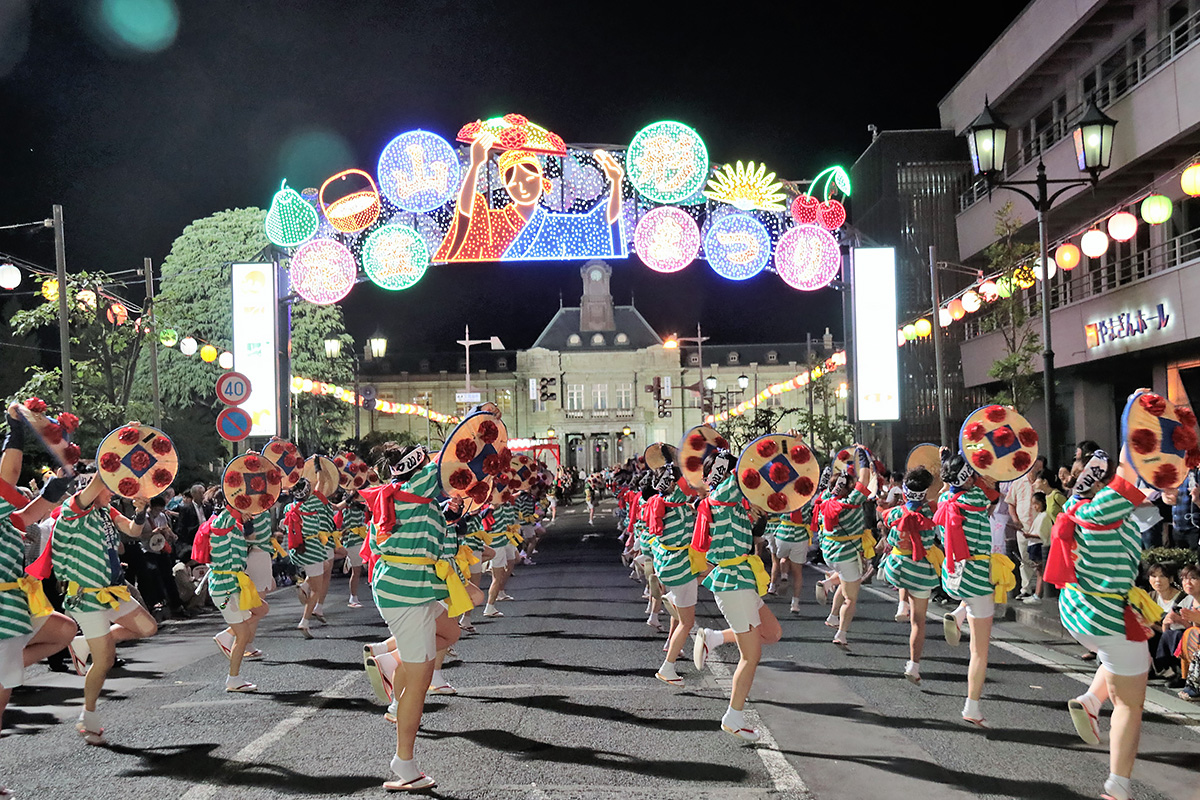 Participants create their own individual style of Hanagasa Dance. 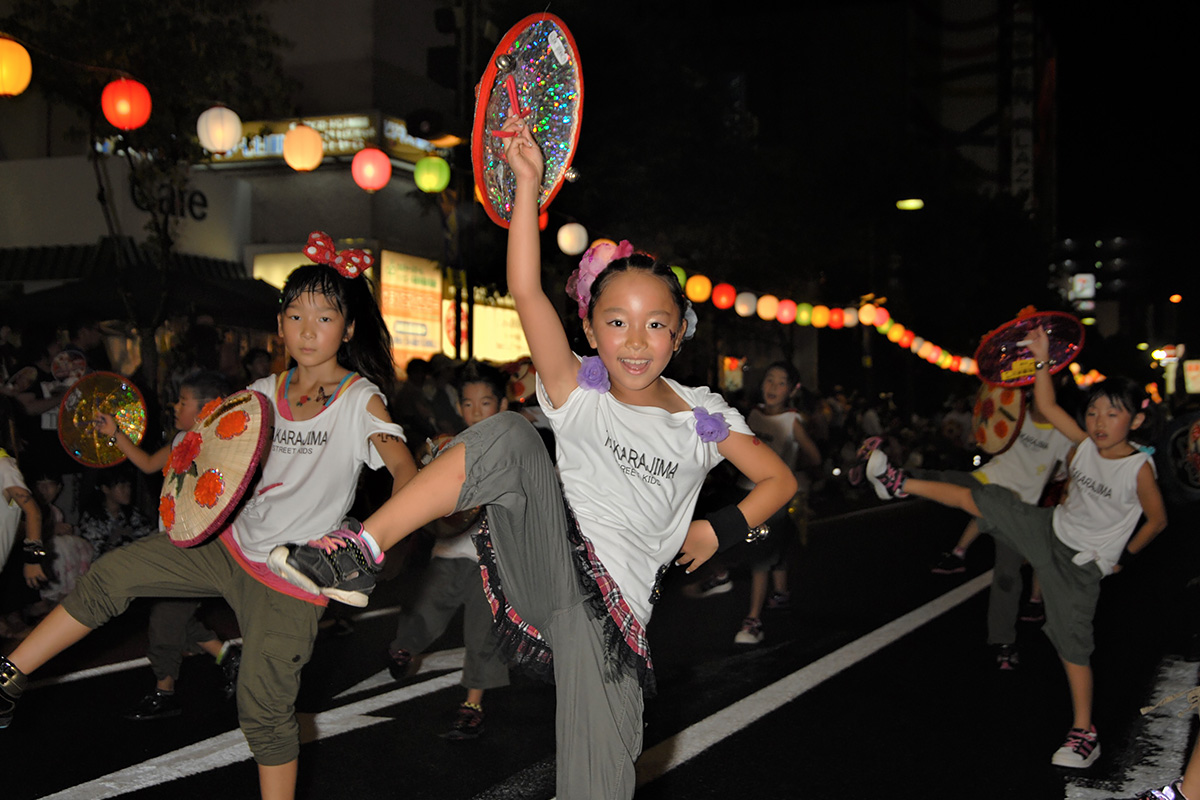 The Hanagasa (flower hat) is a straw hat decorated with the flower of Yamagata, the safflower.
A different type of flower hat is used for different versions of the Hanagasa Dance. 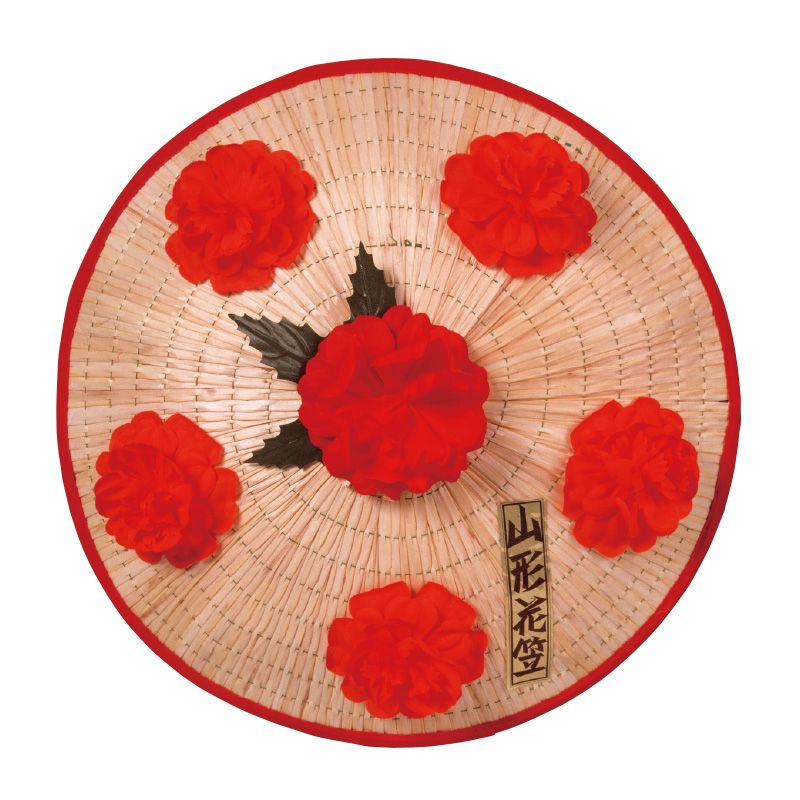 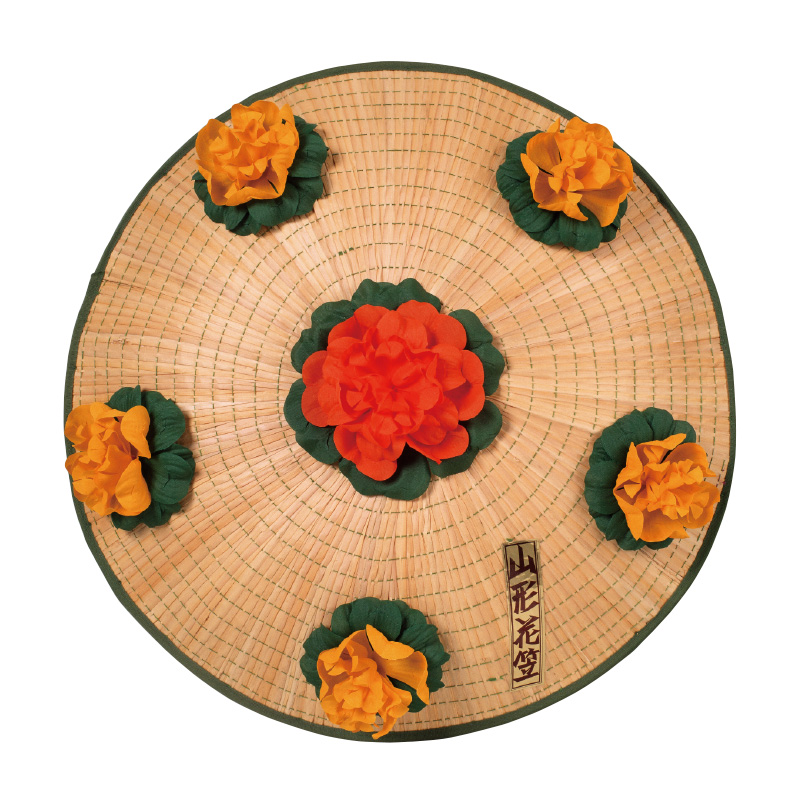 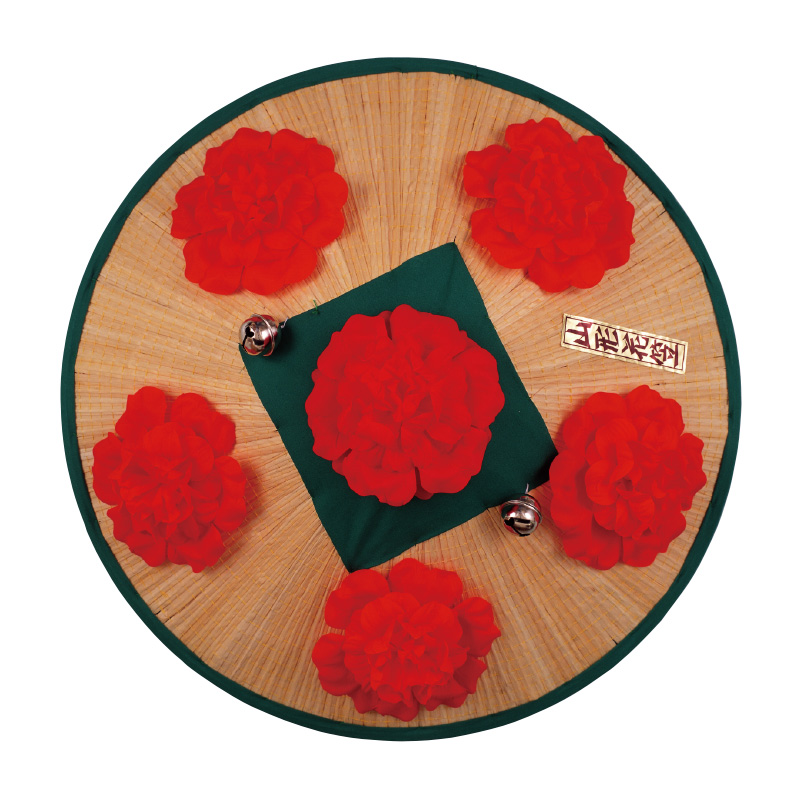 Let’s do the Hanagasa Dance!

Watching the dancers is not the only way to enjoy the Hanagasa Festival. You can also take part yourself.
On each day of the festival, there are two opportunities to join in the dancing. Participation is free and no booking is needed. Anyone can give it a try. By actually taking part in the dance, we can fully appreciate the charms of Hanagasa.

Right at the finish line of the procession, in front of the Yamagata City Office, you will be given a free Hanagasa fan. (a round piece of card, decorated in the style of a Hanagasa flower hat, which can be used as a fan and also folded into a hat shape!). Using this Hanagasa fan, along with a Hanagasa dance instructor, copy her and dance to your heart’s content. 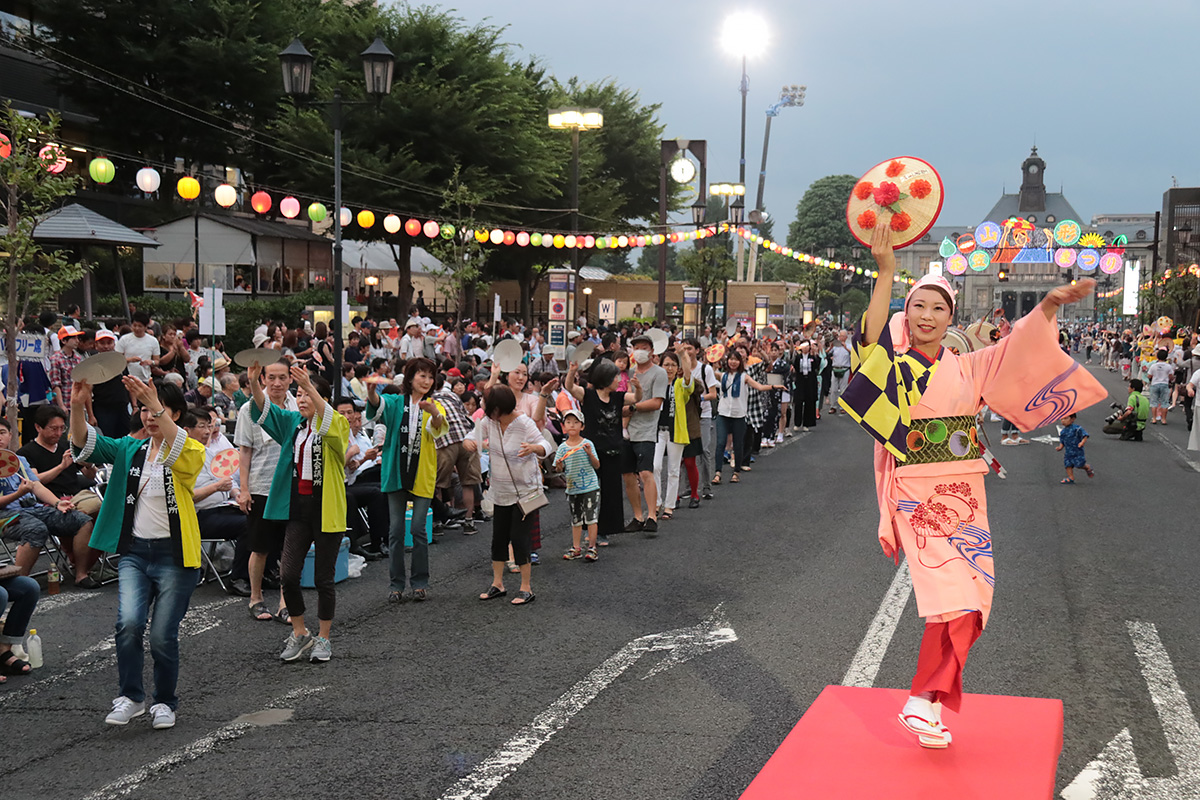 Second chance: Approximately 8:30pm at the end of the parade. “Jump into the parade”

At the end of the parade, lead by a float starring Miss Hanagasa, is our “Jump into the parade” opportunity. When you see a sign reading 「飛び入りコーナー」, jump into the parade anywhere you like, and enjoy the charms of doing the Hanagasa Dance. 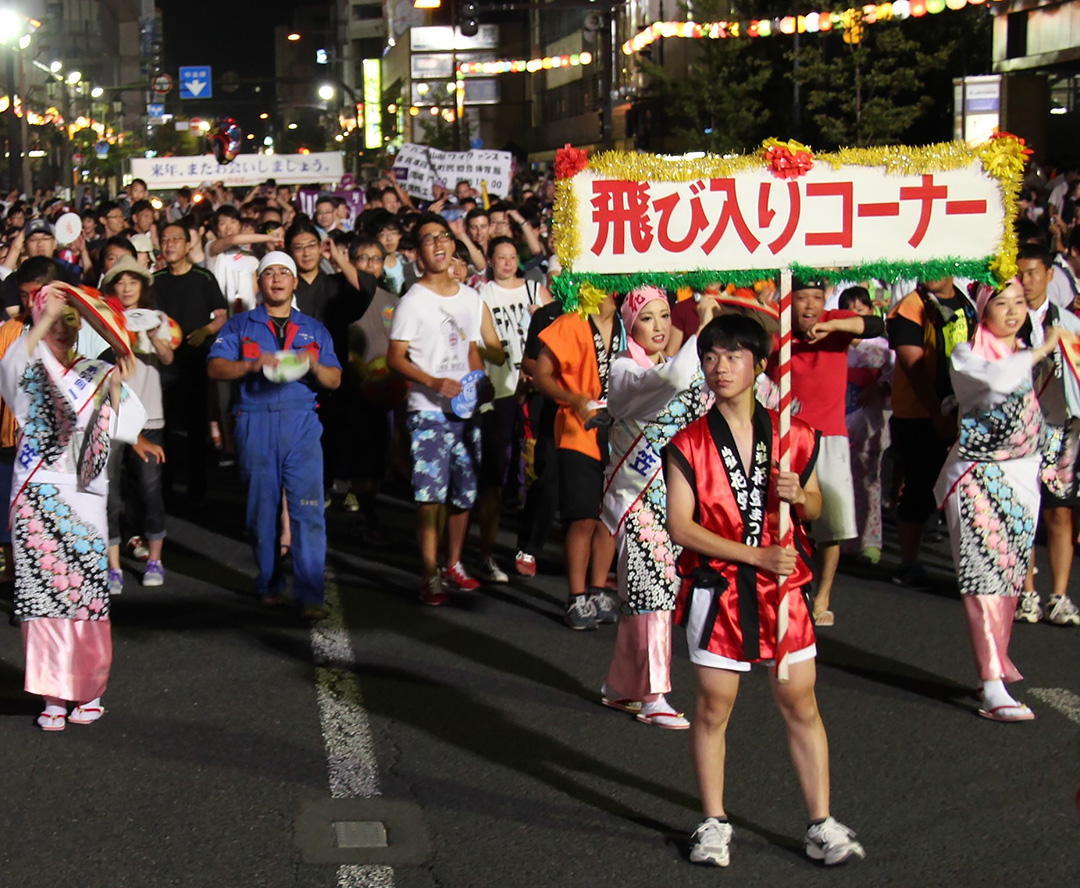